The National Weather Service is predicting a multi-day heavy rain event that will impact much of the state starting today. Storms have the potential to produce 7 inches of rain or more in some areas over the next five days. Governor Greg Abbott mobilized state resources in preparation for the storm.

The Railroad Commission of Texas (RRC) advises all operators under the RRC’s jurisdiction in areas of potential impact to take the following actions:

To view the full notice, visit the RRC website. 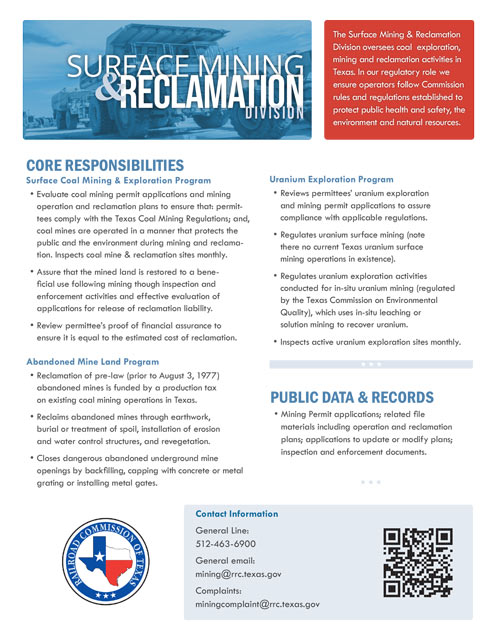 One of the state's most abundant energy resources is a form of soft coal called lignite. Many lignite deposits lie close to the surface, easily reached with modern mining technology. Texas is the largest consumer of coal in the United States and in 2015 was the seventh largest coal-producing state.In 1975, the Texas Legislature gave the Railroad Commission jurisdiction to regulate surface mining for coal and uranium. Companies mining coal/lignite in Texas must have a Commission permit and post a bond for each site they operate in the state. The goal of the coal mining regulations is that the mined land is returned to a condition that is as good as, or better than, it was before mining. Division field personnel make, at a minimum, monthly visits to mine sites, checking for compliance with coal mining regulations.

No surface mining for uranium is currently conducted but uranium exploration continues to be conducted for in situ uranium mining operations and is administered by the Surface Mining and Reclamation Division. (In situ uranium mining is regulated by the Texas Commission on Environmental Quality). Active uranium exploration sites are inspected monthly.

The Surface Mining and Reclamation Division also administers a program to reclaim dangerous or environmentally harmful abandoned mine sites that were mined prior to the implementation of the federal surface mining law in 1975 to ensure the safety of the public and protect the environment by eliminating these hazardous abandoned mines throughout the state.